“Thanks to Tawnee’s cutting-edge coaching theories and approach, along with her nutritional advice (including her in-depth grocery lists, guide to fats, info on becoming fat-adapted, etc), and of course her wonderful recipes she has sent along the way, I was able to transform my body from a carb-hungry sugar-burning monster into a lean, mean fat-adapted machine! I have come such a long way nutritionally speaking and I look back at where I was just one year ago, and I cannot believe the vast improvements in both my nutrition and performance, as well as the well-being of my son. He and I now cook together and he’s adopting healthy habits at a young age.”

A little “case study” of the fat-adapted+MAF training approach in action and working for long-course triathlon. This data is on an athlete I’ve now been coaching for more than a year. When he came to me and I knew I had my work cut out. Bring it.

When I first got access to his food log in 2014 what I saw was astonishing to me, so much junk and crap! But, then a realized, it was not that out of the ordinary for a mid-30s bachelor and busy business owner whom no one ever taught to cook. My turn! Kim came to me with big goals for triathlon and he also has a younger son to nourish, so there was no going easy on him, and no screwing around. We had work to do and I knew I had to clean up his diet first and foremost not only for Kim’s success, but for his son’s development and well-being! That meant, no more Philly cheese steaks, burgers and fries, pizza, beer, Doritos, and Hungry Man TV dinners, and processed cereal for breakfast…. let’s introduce whole foods, veggies, grassfed meats, good fats like avocado, modified LCHF for athletes, the right sports nutrition fueling (aka “down with sugar!”), etc—and teach him how these foods are not that hard to prepare, won’t break the bank, and how they WILL boost performance!

It took a while for Kim to catch on, and it took a lot of persistent encouragement from me. Eventually it clicked, especially once we got into heavier Ironman training this year. He had to see it for himself–the clear connection between his diet and how he looked/felt/performed–and he did. Actually, I think it took some setbacks in which a night or weekend here or there where Kim would revert to his old diet ways, but how that led to him feeling like crap and training quality plummeted. If he emailed me saying there was a night of beer and pizza, I wouldn’t get mad… it’s part of life to let loose a bit… but I would encourage him to connect the dots and understand how that affected his workout or training quality.

Eventually Kim not only adopted clean eating, but he also wanted to be all in for the LCHF and fat-adapted approach to long-course triathlon. A quick side note on how I handle this with athletes I coach: I give them the tools and resources on fueling/sports nutrition/diet that I believe is going to allow for optimal health and performance–that’s generally a lower carb higher fat diet (not super low carb; not keto), and adhering to a macronutrient-timing schedule to develop fat-adaptation. But I know that’s not for everyone, and some folks are happy with and do ok with a bit more carb. So, I let them decide how they want to tackle it (for the record, the pizza+Dorito+beer diet is not an option I offer, but after a race? Go for all that… have fun…. lol). For example, I have another female Ironman athlete in training who’s content and feels good with more carbs in her diet and fueling, she doesn’t prefer gluten free, she’s got good health, and we’ve still worked on keeping her diet/carb choices clean so she’s fueling with quality not empty calories! As such, she may not be as fat-adapted as possible, but that’s ok! Her numbers are looking gooood and we don’t have her sugar-addicted and slamming down gels and sugar every 15 minutes or less, whew.

That said, interestingly, both of these athletes have UCAN in their fueling plan, and are seeing great success with it. You don’t have to be uber LCHF for something like UCAN to work IMO.

Before Kim’s Big Day race simulations and races this year, as I do with all athletes, I’d lay out the nutrition plan starting with meals and dinner the day before. This is where the magic happens–putting it to practice! And it’s important to practice because we certainly made some tweaks before finding the “sweet spot” protocol. For example, Kim loves his high-fat green smoothie before big days and races, but I have other athletes who can’t handle that kind of fat pre-event. It’s individual! Figure it out…

Before we get to his results, a brief note on training–the other important variable that got Kim on dialed in. When Kim came to me, he really only knew one gear: going hard. Sound familiar? It would start in the warmup, in which he’d blow up his heart rate (HR) right out of the gates, well over his aerobic zone. On his first MAF test his warmup HR was higher than the HR in the MAF test portion–not good. We had a talk. As with most athletes, slowing down for MAF and making a conscious effort to develop the aerobic base was very hard for Kim. He’d been in triathlon for three years, and he’d been running even longer than that. He liked speed, and like most he had the idea that training fast equals fast racing. Not so quick, if you know how I roll…. right?!

The great thing about Kim–and this was the case with his nutrition as well–is that he’s always trusted me, listens, and soaks up my coaching like a sponge. I respect that in an athlete so much!

So with training, it was just one day at a time to get his body and mind dialed in–and we had time; more than a year before his first Ironman. That helps. By 8 months in, his MAF pace had dropped about a minute per mile and I could even see in his data and workout files that he was much more in control of his body and learning to be intuitive with workouts. His MAF/aerobic pace has stayed solid, but not every day is better or faster. If/when he sees himself having trouble keeping HR down and pace/HR aren’t the norm, then we talk and we work on recovery. In other words, instead of just following a template, we’re using Kim’s body to guide the weeks of training. This included a mid-season break in July before the final ramp-up to Ironman.

And for the record, not all his workouts are at MAF or lower. He’s a guy who can handle a little intensity–like my Dark Side of the Moon bike trainer workout. When it’s time to throw in intensity, I’m the first one to raise my hand and say let’s do it–but you gotta earn it. It’s like a pyramid–build the base (aerobic efficiency) and then grow it from there.

It’s worth noting that Kim’s also dialed in a solid, steady aerobic pace on the bike too–he can comfortably hold MAF-ish in long races, which not many athletes can do because they lack bike fitness and MAF on the bike feels freaking hard. Kim won’t do most his Ironman at strict MAF, but he won’t be too far from it. Also, Kim doesn’t have a power meter, but that’s ok IMO–watts are not going to make or break your performance. In fact, these days I think less data is actually more beneficial to most athletes so they don’t freak out over the numbers. For Kim’s IM plan, there’s a simple HR range to follow… easy…

Among some other “tune up” races this year, Kim recently PR’d by 26 minutes in a 70.3–a much hillier half than his old PR too!–going 10+min faster on the bike and 10min faster on the run (having trained 80 percent at MAF about). Not to mention, this 70.3 was a late addition to the race calendar and not a race I planned for him to peak at, but the timing and opportunity was perfect so we added it to the schedule and I’m glad we did. It was great practice to dial nutrition in even further before Ironman and that’s what I really want to highlight. Here’s Kim’s nutrition report from the half:

Overall: “This is a far cry from my previous half Ironman’s where I was eating multiple Clif bars and gels on the bike, then on the run basically whatever I could find at the aid stations. It was insane and my gut paid the price in those races. I always felt terrible, bloated, gassy, stomach pains, and inevitably I would have to slow down….” 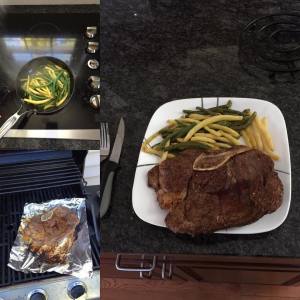 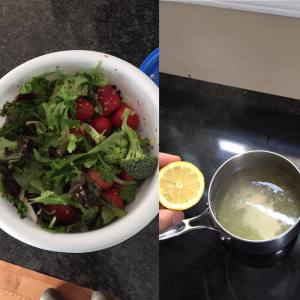 He has a whole new appreciation for nutrition!

Oh ya, and Kim is so motivated by the transformation that he’s now studying nutrition, etc, etc, and wants to diversify his career by being a health/nutrition/sports coach too! Now that is inspiring…. #realresults