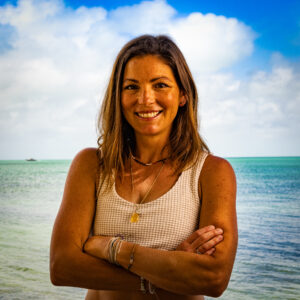 Tawnee Prazak Gibson, MS, CSCS, CISSN, fell in love with triathlon in 2007 upon finishing the summertime Solana Beach Sprint triathlon. That race and that day literally changed her life forever. At the time, she was freshly graduated from San Diego State University with a degree in journalism and working as an editor/writer at a newspaper. Meanwhile, her passion for endurance sports and triathlon—along with studying exercise science, nutrition, health, strength training, etc—had been growing exponentially. Immersing herself in the endurance sports world, along with a desire to further her education, led her to pursue a new career path and hone in on her talent as a triathlete.

She took a leap of faith by stepping down from her newspaper gig, enrolling in graduate school, and making the commitment to build her own coaching/consultation business and career in endurance sports and holistic health. She studied at Cal State Fullerton, earning her Master’s Degree in Kinesiology (emphasis exercise physiology and strength and conditioning), as well as earning other relevant certifications along the way.

Meanwhile, she continued to race triathlon as a top amateur, with some great successes along the way, and nearly 100 race finishes in less than 8 years. She’d usually finish on the podium (top 3) or go top-10 in her division, and a couple times qualified for and raced the 70.3 World Championships—her favorite race distance. In 2011 she did her first full Ironman in Canada, and while an amazing experience, training for and executing 140.6 miles of swim/bike/run was taxing and took away from her business goals so she focused more on half-iron distance in order to have the time and energy to develop her coaching practice. She maintained side jobs she had including freelance sports writing, fitness modeling, personal training, hosting the Endurance Planet podcast, and working at the Ironman World Championships in Kona, Hawaii for many years.

Eventually, however, red flags were starting to surface. Subtle at first, but then undeniable. Her health was suffering greatly as a result of the huge training stress and the relatively intense lifestyle of a young female entrepreneur. She still had some of her best performances to date into 2013, including her first overall triathlon win (in the female field) and a PR/podium at her “home race” Ironman Oceanside 70.3. Then it all came crashing down. Performances started tanking, mood and irritability getting worse, and gut health and hormones completely wrecked. In this, was a nearly decade-long battle with amenorrhea as well as disordered eating (the after-effects of an eating disorder she developed back in undergrad at a young age of 18). However, she was still committed to race her second Ironman (Tahoe) and the 70.3 World Championships later that year in fall 2013.

Those late ’13 races didn’t end magically and the writing was on the wall. Things had to change. Even though she was incredibly fit, she was also unhealthy—the fit but unhealthy syndrome is a common issue in endurance athletes and at the time she didn’t fully understand this phenomenon, but she dedicated herself to research and education to understand more and heal herself holistically. She made health her new No. 1 priority, and through a great network of experts she had built she along the way, she began the road to recovery and healing. Within weeks her period returned, and that was just the beginning.

She didn’t quit sport cold turkey, and still was racing a little, but fixing her health was the top priority. She had no doubt that the functional health model would be the ticket to success because this approach uncovers and heals underlying issues rather than just treat symptoms. She built a team of practitioners and did testing for her hormones, adrenals, GI/gut, blood chemistry, and more. She started researching everything possible to learn how to rebuild health the smart and safe way—this became the next chapter of her ongoing education. She regained regular menstruation and her gut issues began to heal with intense protocols and dedication. Her energy and mood were so much better. She was sleeping like a baby for at least 8 hours every night for the first time in ages (after years of insomnia). All the while, she didn’t give up exercise nor training, but in this new norm things like tempo runs were replaced with bikram yoga, and meditative stand-up paddling on the ocean replaced performance-focused ocean swims.

By 2015 she was in a great place, felt a ton better, and understood her needs. Her hormones went from being at a post-menopausal status (i.e. not producing any progesterone and very little estrogen) to being all within normal ranges, and her basal body temp rose. With proper diet and nutrition tweaks along with temporary supplement protocols she was having success with killing and correcting gut issues including H. Pylori, fungal infection (candida), small intestinal bacterial overgrowth and other markers of dysbiosis—and the differences were miraculous! With this new level of health she was motivated to train and race something again and decided to mix it up and try an open marathon, something she hadn’t done before!

In May 2015, using the MAF Method, she ran a 3:30 marathon (her first open marathon) and qualified for the coveted Boston Marathon—while maintaining great health, regular menstruation and no setbacks!

But a year later she learned she was not out of the woods just yet. She was yet again busy training for Boston and planning her wedding, and seemingly overnight she felt the onset of unusual symptoms, which she addressed immediately and confirmed to be early onset of a potential autoimmune condition. Once again, back to the drawing board to heal using the functional model—going all in. By implementing the AIP diet, supplement protocols, proper stress management and more lifestyle adjustments she was able to get rid of all of her symptoms within 3 months, putting the autoimmune condition into remission and to this day it has never resurfaced; no easy feat.

During that phase she still was able train, toe the line and run Boston in 2016, but did so with a different attitude—one of making wellness a priority not the finishing time. She ran easy (health first!) and enjoyed every step, soaking in the unique experience. The marathon was a success!

These days, Tawnee is still very active in her coaching and consulting business and hosting podcasts, with clients who span the globe. Personally she enjoys a new world of outdoor activity beyond just organized competition. She’s an avid backpacker, certified scuba diver, stand-up paddleboarder, wanna-be yogi (bikram), surfer, snowboarder, and has been known to participate in some EPIC Ragnar races with a team she and her husband put together featuring Endurance Planet fans and members. She also enjoys swimming, biking and running for fun and health, as well as utilizing her home gym for strength training, rowing and more. Her adventurous spirit accelerated to the next level when she and her husband embarked on van life travels, traveling on and off for a number of years—during which they met endurance friends and colleagues around the US and ran/hiked some of the most beautiful spots North America has to offer!

In 2017, she became pregnant with her first child—a true gift after years of wondering if she could ever become a mother due to prolonged menstrual irregularities—and after a healthy, normal, full-term pregnancy, their newborn daughter was born but tragically passed at birth due to labor complications and circumstances out of their control. Upon this shocking and unexpected horrible tragedy, Tawnee was devastated beyond words and immersed herself in a new kind of healing—healing from trauma, PTSD, grief and extreme emotional turmoil, implementing a serious meditation practice and various healing modalities, yet again treating healing as her job. She made immense progress and became pregnant again fairly quickly, giving birth to a beautiful, healthy baby girl in April 2019. Tawnee is currently pregnant again with their third child, due in fall 2022.

Throughout her journey, Tawnee has candidly shared her health issues, progress and setbacks on her blog at tritawn.com and on the EP podcast. (She also chronicled her story of baby loss and healing at lifeafterwhitney.com.)

Tawnee works with all levels and ages of athletes with various goals ranging from fixing health to PR’ing their next race to leveling up their goals to new distances. She is dedicated to a holistic approach working on a person’s complete needs—physical, emotional, spiritual, and more. Find out more here.