Last year I had the pleasure of coaching a lovely triathlete on the East Coast for her return to IM Canada (she had unfinished business there, and we took care of that). Erica always had a way of making me smile and laugh, and I got her to push herself to new levels that even had her hubby going, “Whoa!” So after IMC, her hubby, Damon, approached me saying it was now his turn to hire a coach and have an epic year of racing, as he and Erica sort of trade off years as to who gets the green light to do a big race. Damon (aka “D”) saw the successes that Erica had, and he wanted in. I was thrilled because D’s A race of choice was something I was stoked to coach: an epic 7-day mountain bike stage race through the singletracks of British Coloumbia. I myself was getting into more MTB at the time, and had been dying to coach a MTB athlete. (Note: D is also a veteran triathlete.) 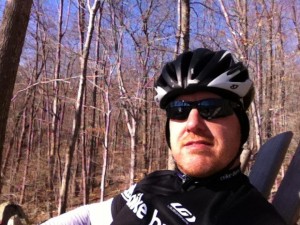 Training for BC Bike Race on just one of many frigid East Coast days.

It feels like just yesterday that D and I teamed up, with me instructing him in his general phase of training with lots of strength training and getting back to regular workouts. I was happy that we started so early (fall 2011) because training for an event like his requires a huge foundation of both strength and aerobic endurance. And, of course, with any athlete getting back to that kind a routine, he or she has to find all that extra time in a busy schedule to make it happen, so with D it was a gradual buildup that really got going in the beginning months of 2012.

Before I talk a little more about the details of how I coached D for this race, I have to jump ahead to the present. Today is Day 1 of the BC Bike Race, and I couldn’t be more confident in D’s fitness and ability to do this both mentally and physically.

Physically, D says he’s the lightest he’s been since high school (weight loss was one of his goals with our training), and he’s the fittest he’s ever been in his life (and this is a guys who’s done Ironmans and countless triathlons, MTB adventures, etc). For example, D likes to go on difficult group rides in his area, and in the past he was always a back-of-the-pack guy who could hang but not set the pace. Well this year, when those rides got going again with the onset of longer daylight hours, D was leading the pack and left his friends with jaws dropped open saying, “Who is this guy?!” Literally. D is hammering and it’s so fun as his coach to see all his successes! Heck, even with all the bike training, D’s done several shorter triathlons and is always a top finisher in AG and overall… he’s even setting run PRs, and his run training has only been half of what it will be once we focus on tri again.

I think mentally, too, D was ready to lay down the hammer this year and do work. During our weekly chats the mental side of everything always comes up, and I think that’s been a huge part of making this work. D trusts me and knows I mean business, and I trust him that he’s ready to endure it all because he wants it.

Very well because BC is no joke and you can’t fake it. Each day of the race the riders put in 20-40+ miles on the MTB with anywhere from 3,000ft to 7,000ft of elevation gain! For seven freakin days! Today he sets off with not only the confidence knowing he’s fit to do it all, but with the tools to execute the days well… we’ve gone over nutrition (he’s mostly using Skratch Labs Drink Mix), intensity/effort on the various days and various parts of the race, and so on. It’s all about planning.

So a little about his training. It’d be fairly arduous to go over all of it — although D told me to go ahead and get personal with the nitty gritty hahaha — but I do want to touch on some key points that I see relevant for you guys. Some of these topics, such as testing, I’ll be writing about in a stand-alone blog next week so stay tuned:

Testing. I used several tests with D because I like to look at one’s fitness from various ways, one test alone will suffice, but more tests — to a certain extent — can complement each other I believe. There’s a point of diminishing returns there, however, and you don’t want data overload!

Cross Training. You have to be strong in many ways to MTB the way D will be doing. Thus, as mentioned, we had lots of strength training in his routine, as well as swimming and running. The key here was accepting that D’s swim and run would suffer to some degree, but that’s because we had be specific to his goals: biking! Funny though, his run actually improved a bit.

Time on the MTB vs. Trainer or Road. D lives on the East Coast, thus the weather was a big issue through winter and spring. Believe it or not, D spent most his time on his bike trainer — that can be mind-numbing. Thankfully he not only has the willpower for that, but a nice LeMond trainer as well 😉 It wasn’t until we started getting longer days and dry weather that D started putting in hours on his MTB.

Big Days. D is a dad, husband, friend; he has a job, a life, responsibilities… etc. He couldn’t drop it all to train for BC. So we literally worked on the day-to-day with his training, as I do with all my athletes, to accommodate his needs and made sure to plan to get in big days when it mattered and was feasible in his schedule. There’s no way I could have written a plan that extended two to three weeks out and expected that to work. Just doesn’t happen.