In my last post I mentioned it takes a long time to build fitness and you can’t expect overnight results nor a coach to work magic for you. But that’s not to say you should continue to just build build build and beat the body down without adequate recovery and breaks from your usual sport to do something else instead. There’s a definite point of diminishing returns with training, in which more is not better, and, in fact, in the process of getting fit over time, recovery is the most important factor in achieving success. Without recovery we simply can’t get stronger. How much should you do then? Read on.

Also, speaking even more to the psychology side of things, two other key points outlined today. One: addressing fear and how it plays a role (namely the fear of failure) in sport. And two: the dangers of comparing our training to that of others.

A little more context before we get rolling: I was riding my trainer Friday, and listening to an interview with Dr. Jeff Spencer (if you don’t know who he is, click his name). I was already planning on writing a blog on these topics as a followup to last week’s post, and when I listened to Spencer on this particular podcast, Abel James’ Fat-Burning Man, I got chills. He was speaking on everything that was on my mind, and some, and saying it so eloquently — probably better than I could lol. It hit home so glaringly strong that I had to listen a couple times and finally I decided to transcribe some of the show and just let Jeff’s powerful words do the talking here. Pretty much all of what he’s saying are the same principles on which I’m building my own training and that of my clients. And it makes perfect sense, but it isn’t always easy.

Some material quoted, some paraphrased….

We are hardwired to psych ourselves out based on the “survival instinct” (aka fight or flight),” says Jeff. “We talk ourselves out of it because we don’t believe we can. We have to train ourselves beyond that, we have to look at the facts for what they are, and then we have to stick to the facts when it’s time to perform. That’s hard to do because most people revert back to a fear-based decision-making process.”

On overtraining: “Your mind can’t believe that less is better.”

“If your performance is declining that’s a sign of overtraining, and you cannot train yourself beyond that, and many people mistake that [decrease in performance] as ‘I’m losing fitness.’ Their brain plays a trick on them.”

“If we have a slowly declining level of performance it’s not because we’re losing fitness, it’s because the recovery is not adequate to take us back to baseline to perform at a hard level. Something is out of whack…”

“It’s not about doing harder, or bigger, or more. It’s about what are the right things that need to happen now to responsibly move to the next level,'” says Jeff. He then suggests you need to define 1) where you’re at, and 2) distinct goals on where you want to go. In order to have success with this (and do the right amount and not too much), a mentor/coach is of extreme value in the process*.

“To begin to exercise restraint when we see other people working harder is one of the most difficult things of all because we believe ‘they’ are getting the advantage and we’re not, and if we don’t do what ‘they’ do then we aren’t capable of performing at ‘their’ level. Even though history tells us that it’s not [that way].”

Jeff then brought up Michael Jordan. “He’s casual; [critics argue] ‘Gosh, imagine how good he would be if he really tried?'” But that was faulty logic. Jeff says Jordan was doing it right. Jeff mentions, for example, Jordan playing golf, and by doing so it appeared that he was slacking off and wasn’t taking his sport (basketball) seriously. Some would argue that golf was taking away from his ‘real’ training. But Jeff argues that Jordan is taking basketball seriously even when playing golf because Jordan “understands that he can’t be doing what he’s best at all the time otherwise he’s overtraining.”

“Recovery is where the improvement for performance comes…” 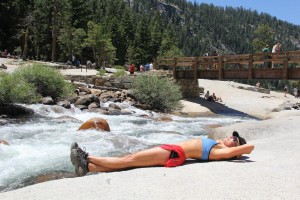 So…. My thoughts on Jeff’s philosophy presented here? A big fat “heck ya” and I am 100 percent in agreement. I couldn’t have said it better. And hats off to Abel James for carrying on such a quality interview.

First off, I think his take on recovery is BY FAR the most important takeaway message. You cannot just beat yourself down down down and expect to survive. And just because your neighbor can train 20hr/wk and run 20-milers no big deal doesn’t mean you can or should. Granted, some athletes do need to be pushed harder and aren’t doing enough…. but that’s rare in triathlon. Usually they’re doing too much and can benefit from less with more focus on quality.

Secondly, on using coach and/or mentor to guide your plan. A good coach is going to do his/her best to give you the right formula of workouts for your needs; for some people that’s teaching them to push to new limits, for some it’s teaching them not to overdo it. We know that some people are workhorses, some are more delicate. Train accordingly. Some races require more training, some require less. Train accordingly. But coaches know that no matter who you’re dealing with, the program on any given day/week may need to be modified to do what’s right for that particular time (like Jeff mentioned). We all change in some way every day and we don’t operate “textbook” style when it comes to our training needs. That’s why I don’t sell pre-written coaching plans for a races 8-16 weeks away. It’s constantly changing and evolving. Sometimes with certain workouts I prescribe, I’ll even give options (assuming my athletes aren’t “lazy” and aren’t just looking for an excuse to bail, lol). For example, sometimes in tougher periods of training or as a race is nearing I will post a workout but say, “Only you know your body best and if you need to cut this down, if we need to reschedule it for a day when you feel better or skip it all together, THAT IS OK.” Without a coach to tell you when to hold back or skip the workout if you don’t feel right, it can be tough because you, the athlete, start to question and wonder if you’re doing enough…you know your body is beat and red flags are flying but you still find a way to train thinking, “If I skip that workout, it will ruin my race.” Answer: NO IT WON’T. If you’re questioning if you can even put one foot in front of the other and all you want to do is sleep, then freaking rest. The problem is that many athletes will then feel guilty about not doing XYZ, or guilty because they know their friends can do it and/or are doing more then they are, or guilty because they found a plan to follow but simply can’t get it done. A full-time coach, or some consultations with one, or asking questions to an expert can ease those fears.

Third and last note (although I could go on and on), on doing things other than your sport. One thing that stands out in my personal journey in triathlon (which got started late 2006; first race in 2007) is how guilty I used to feel if I did an activity/sport other than swim/bike/run. For years I didn’t snowboard, and also my surfing declined greatly. And that’s coming from someone who LOVES both those sports (others too, like volleyball, or even non-sports like painting, etc). I went 6+ years without snowboarding due to triathlon, but in a previous life snowboarding was a regular part of every winter. And with surfing, since I live by the beach, it didn’t completely disappear but sessions were few and far between. In 2013 and even more so in 2014, I said screw it. I love other sports outside of triathlon, and I find that doing those other sports are refreshing and actually HELP my triathlon training on many levels… bottom line: do what sounds fun and be willing to step away from the grind of your typical training — doesn’t mean you’re slacking, and it’ll do you well.

To your health and fitness,