Last winter, life came full circle when my former high school volleyball coach, Michelle Kyman, contacted me about wanting to get into triathlon. She was in the market for a coach 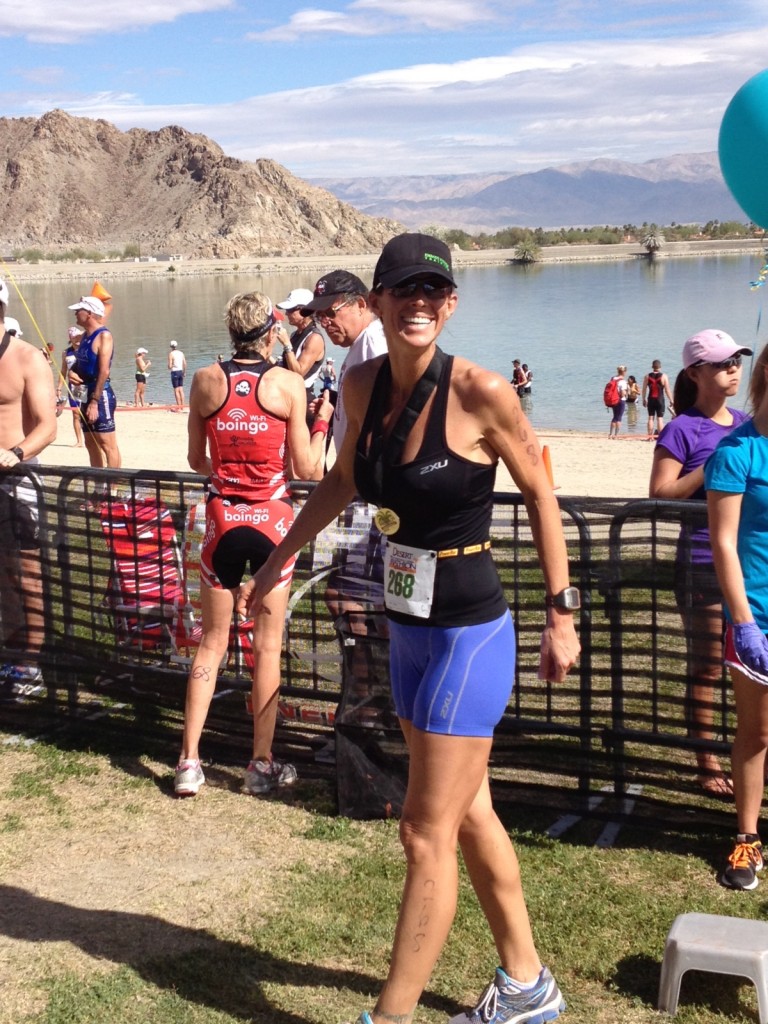 Post-race smiles for the new tri-addict!

who could teach her the ins and outs of the sport, as it was totally foreign to her but on her bucket list. I was beyond excited to say the least — heck, I could finally dish out the wall sits to her now!!! (Just kidding, but not really — I dished ’em.) Wall sits aside, I was super excited because I know Michelle is a hardcore, dedicated athlete and anything she signs up for she takes seriously. Since her days of playing elite volleyball and coaching, she’s become a successful personal trainer and fitness model. She knows her stuff when it comes to the body, performance, nutrition. Plus, her husband and two boys are also amazing athletes, and combined they’re a family that embodies health and a sporty lifestyle. However, swim-bike-run and endurance training in general were completely unknown territory. It’d be my job to turn a largely anaerobic/power-based athlete into an efficient aerobic machine…

We officially got together as coach-athlete on Dec. 1, and set a lofty goal of having Michelle race the Desert Triathlon (the sprint distance) the first weekend of March — just three months later. Our first one-on-one workout session was at the pool. Now keep in mind, Michelle is very strong and fit, but she had never swam beyond messing around in the water during trips to the lake with her family so, for her, it was a struggle just to make it 50 yards freestyle without having to stop… rest… and breast stroke. Seeing this, however, did not scare me from the job. In fact, it motivated me, and I’m confident she felt the same way. That day I gave her a few key cues and drills to focus on (not too many, as to not overwhelm), and we got to work. By the end of the session she was making those 50s, and even some 100s.

Within the first month of our training, Michelle was responding very well to the training, and I decided to give her a proposition: Instead of doing the sprint at the Desert Tri, why not try the International distance, which was double the distance, specifically a 3/4-mile swim, 24-mile bike and 6-mile run, which is about the same as an Olympic-distance tri. She was clearly dedicated to the training and could handle the loads well, so why not?

After giving her that option, it didn’t take long to hear back. I believe it was later that night that I got the email: “I want to do the longer one,” she said. Perfect, I thought!

Going the longer distance would thus require more of a focus on nutrition during training and the race, aka the “fourth discipline.” I introduced her to the best to make it easy on her: Skratch Labs Drink Mix, as well as MAP, both of which she loved from he beginning and had no issues with. She was also having no issues with the training either… by January she laid down a 40+ hour training month, including her very first ever open-water swim where we braved some frigid water temps (low 50s) at a local lake. While I can’t say that she loved her first OWS, I knew she was loving this triathlon stuff in general. She said something along the lines of, “I’m liking this even more than I thought I would.” By February, we were getting even more specific by dialing in race intensities, going through race simulations, practicing transitions, etc. Then, just like that, the beloved taper came. The week of the race we met to do one last open-water swim and a full run though of transitions exactly as she’d do in the race. I wanted there to be NO question marks come race day on anything. 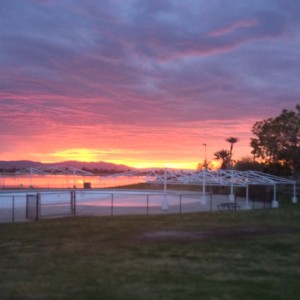 Sunrise in the desert.

Sunday, March 3: Race day. Ah, race morning. I love it! I found live race results (not my first time scouring for live results to follow even when the race website doesn’t provide them, haha), and I delayed my training session a bit to track her. I had given her down-to-the-second time goals for swim, bike, run, transition and overall. When I saw her swim split and that she nailed the goal I flew out of my chair in excitement. I knew the swim in open water was going to be the most intimidating and the biggest hurdle. But she swam roughly a 2:08/100 pace for the 3/4 mile swim. Perfect. Then onto the bike, which she nailed going even faster than I planned, averaging ~19mph for 24 miles. On the run (which I see as her strength) I wanted her to go sub-50 for the 6 miles. She nailed that too with a 48min and change, a sub 8:10 pace.

By the time she crossed the finish line, I had started my bike ride, but I was checking my phone for results every chance I got (hopefully I didn’t annoy my boyfriend too bad in doing so with the stop-and-go, haha). Very soon after her run split popped up along with her overall time — which was even faster than our predicted goal time — I stopped to call her to congratulate! She was on Cloud 9, and I knew she was hooked. Wait for it…..

Later that day, she gave the “textbook” post-race newbie response: “I want to do another one.” And so we are…. 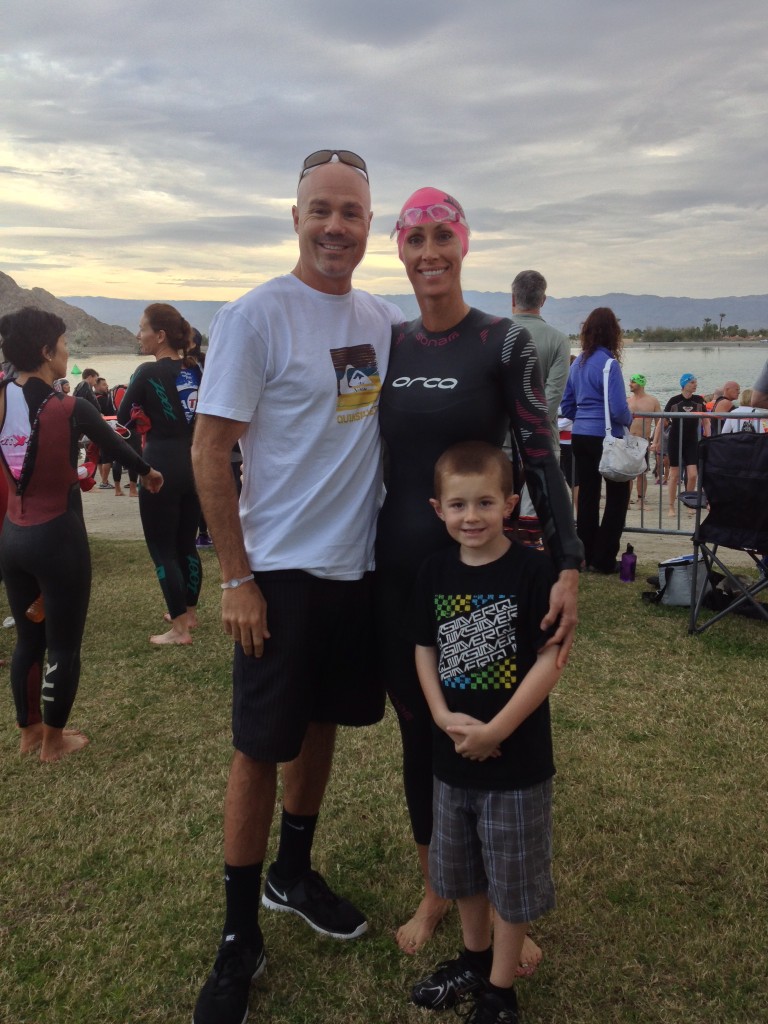 Michelle pre-race with her husband and one of her sons… aka the sporty (and tall) family! 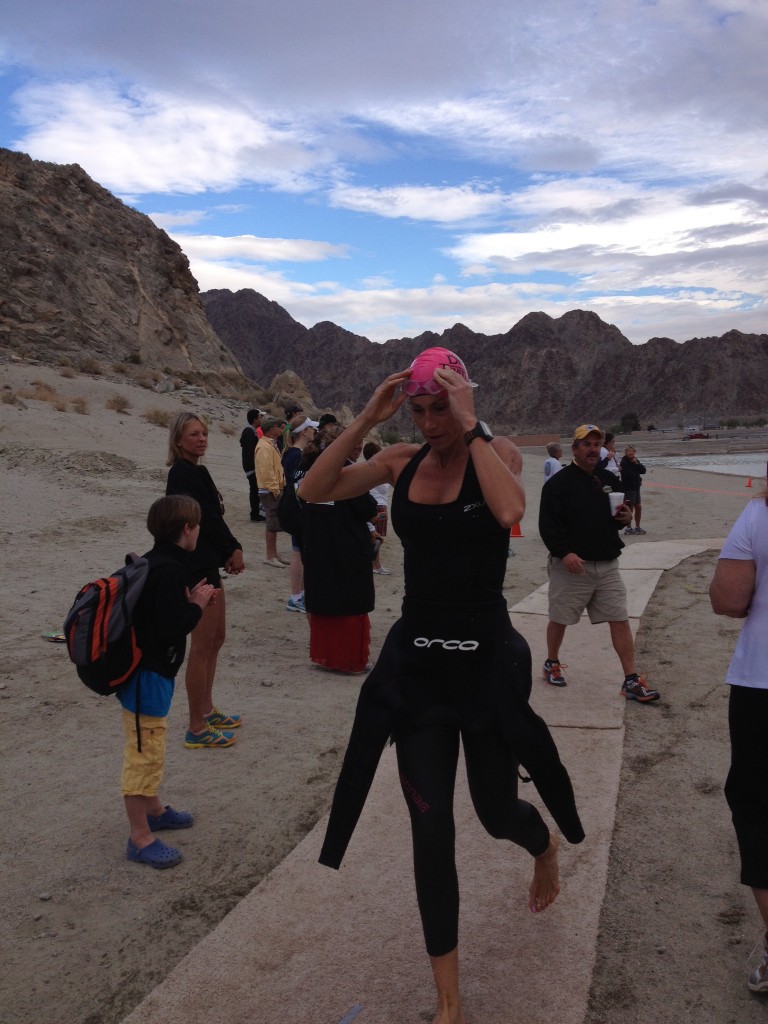 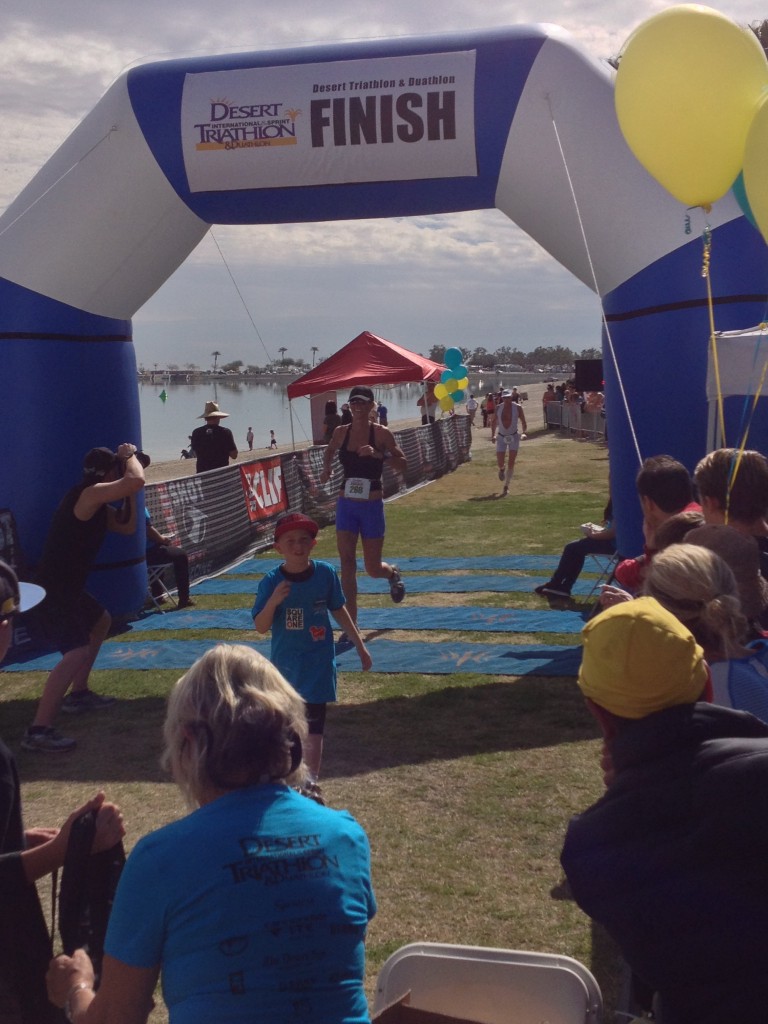