Last week on the Endurance Planet podcast, we talked about fish oil supplement, which supply you with omega-3 fatty acids in your diet. It was pointed out that we as consumers should be very discerning when choosing a fish oil supplement because they are NOT all created equal! Personally, I can recall getting cheaper brands a long time ago, which would give me nasty fishy burps (sorry if that’s TMI). I thought the bad taste was just a “side effect” of trying to be healthy and I had to cope. Not so! That bad taste is a good indicator that the fish oil in the supplement is rancid. And that’s just the first thing… There’s more to look for when buying fish oil–namely, it’s form.

After I discuss the importance of form, I’ll tell you some other things to look for in a supplement, why I use the brand Nordic Naturals, and why omega-3 supplementation matters at all! 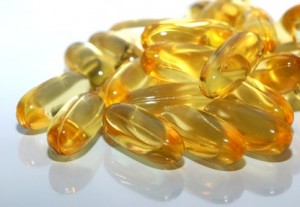 About ethyl ester (EE): This form is easier (cheaper) for manufacturers to produce because it leaves one step out of putting it back to its triglyceride form. Bascially, it’s converted to EE during distillation to remove contaminants (heavy metals, PCBs, toxins, etc) and EE is easier to work with during this process. But THEN when it gets to us, EE is not so good! There are many problems with EE form: 1) EE is actually a synthetic fat so its foreign to our bodies to some degree; 2) It is not absorbed as well and with the extra steps the body goes through to use this form has some not so desirable side effects, such as oxidative stress and the release of free radicals; 3) its risk of rancidity, decay, is higher (even once this fish oil is in the capsule, prolonged exposure to heat could cause rancidity). So yea, that fishy-burping I mentioned? Most likely that is a side effect of the fish oil being processed through the liver (which is required in EE form, and not a good thing) and the body not liking that.

Triglyceride (TG) form: That last step in the manufacturing process that most companies don’t do it putting the fish oil back to the TG form. The TG form is what our bodies know and recognize. Fats are naturally stored and transported this way, so when we take a TG fish oil it promotes way better absorption because its more efficient and more effective. What we want from the fish oil is the EPA and DHA–the omega-3 fatty acids–and when its in TG form I’ve seen numbers from studies show that the omegas-3s are up to 50-70% better absorbed than when in EE form. When you take TG fish oil the fatty acids are absorbed in the gut (no messing with the liver) and then put into their natural form in the body. The TG form is also less oxidative, meaning its more stable in our body and won’t produce harmful products. There really aren’t any negative side effects to TG form as compared with the EE form. Bottom line is TG form is like we would get it from quality fish. There are no EE fish in nature. Keep it real!

The TG vs. EE issue is probably the biggest thing to look for when purchasing fish oil supplements. However, there are other things as well that I recommend looking for, This includes the overall methods of the company and if they’re practicing sustainable sourcing of their fish, i they’re environmentally friendly and responsible, they ensure that they’re getting rid of heavy metals and toxins, among other things. 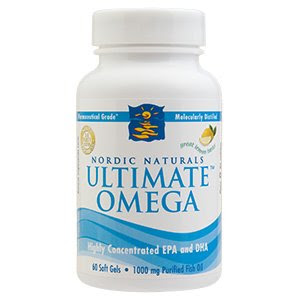 There’s one company I was turned onto by a friend and well-respected trainer/triathlete. This company is Nordic Naturals. At first, I was skeptical to spend a bit more than I had on fish oil, but then I read up on the company and they make everything readily available online on what they’re doing, the type of fish we get, the quality of it, etc. Plus, the price really wasn’t that much more than I was already spending and the benefits and sense of security I got were well worth it–no fishy burps! For the record, this company is not paying me to write these words, and I still pay for their product! I take their Ultimate Omega (pictured left), but I got some Ultimate Omega Sport, which includes Vitamin D3 and even more EPA, and I’ll probably transition to that once I’m done with what I have on stock. I’ll say though, Nordic Naturals has great customer service: They reached out to me knowing I liked their stuff (from a previous blog) and gave me some samples to give to my clients, friends and family, so that more people would be turned on to Nordic Naturals. If you’re local and want to try some, give me a holler!

Last but not least…

Why take omega-3/fish oil supplements in general? If you’re now sitting there thinking, “Why the heck are omega-3 fatty acids so important that I should even dish out the extra dough?” Here’s some answers for you, whether you’re an athlete or not…

1) How omega-3 helps an athlete, physically active person (or anyone really). Omega-3 supplementation can:

2) Furthermore, we should constantly be striving to balance our omega-3 to omega-6 ratios. Most Americans have too many omega-6s in their diet and not enough omega-3s. Why is too much omega-6 bad? Many omega-6s promote inflammation. But omega-6s are nearly impossible avoid (they’re in seeds, nuts, vegetable oils, snacky foods, fast foods, etc), and we don’t need, nor should we try, to rid our diets of them, but it’s best when you’re getting sufficient omega-3s as well. When you’re ratio is out of whack, studies show that can result in certain diseases–autoimmune disease, asthma, even certain cancers. A raito of 2:1 or 4:1 of omega-6:omega-3 is acceptable.